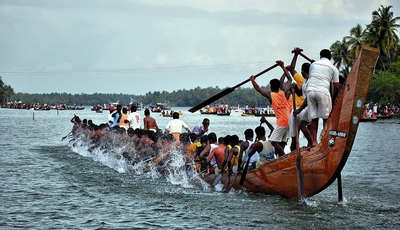 It is in the months of August and September that the moist, rain-drenched earth and the glorious everflowing backwaters burst into song together, as over hundred thousand men and women gather on the banks to witness a spectacular water regatta - the SNAKE BOAT RACES. Boat race crews begin to practice for the race months before the great day. They live together, eat together, toil together to work themselves into a smooth, co-ordinated team.

A splendid procession unfolds with all types of 'Kali-Vallangal' or RACING BOATS, led by the largest and the most majestic of them, the 'Chundan'. Its rowers sing songs known as ' Vanchi pattu ' to the rhythm of the oars - a feast for the eyes and the ears. The largest of the 'Chundan' boats the length of which varies between a hundred and a hundred and thirty feet can seat a hundred and twenty rowers, sixty on each side. Like the neck of an angry snake it curves to a height of fifteen to twenty feet. The prow is pointed and stands four feet above the water with its glistening brass embellishments. The main steerman of the boat stands on the amaram with 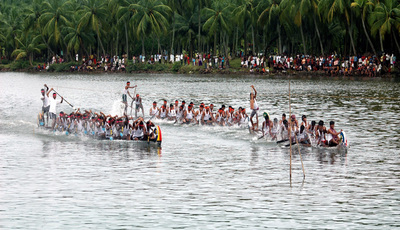 specially made long oars. The efficiency with which they handles the oar is what establishes the speed of the boat and its balance. They claim that a single strong plunge of the oar into the water can take the boat three leaps forward to a distance of thirsty feet.

On boat race day, the 'Chundan Valloms' as the greatest racing boats are called -are slicked down with a special oil to make them glide effortlessly through water. The crews then visit a shrine carrying the stroke and largest steering oar with them. And having offered prayers to the Almighty, they are now ready to war with their fellow men. The air crackles with excitement as the best of the 130 feet Chundan Valloms, each manned by over a hundred rowers, fly through the waters at break neck speed, egged on by the fierce competitive spirit that marks the event and the spectators lusty roars. 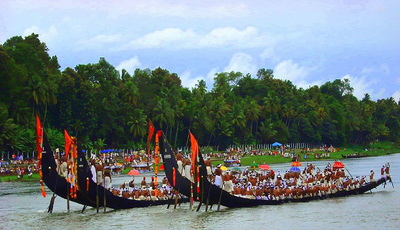 The most famous of these is the NEHRU TROPHY BOAT RACE on the Second Saturday of every August There are a dozen other Snake Boat Races. The latest addition is the one in connection with the GREAT ELEPHANT MARCH held on 19th of January every year. 'Champakkulam', 'Kavalam', 'Karichal', 'Jawahar Thayangari', 'Kallooparamban', 'Pacha', 'Pulinkunnu', 'Nadubhagam', 'Cheruthana', 'Kandangari' and 'Paippad' are the chief competitors for the trophies. Large and spectacular 'chundans' glide towards the finishing line like meteors in the sky with water splashing violently on both sides like streaks of lightning. An unforgettable and truly special scene. The fund of energy, spirit of competition and unerring co-ordination makes this sport one of the most dynamic. 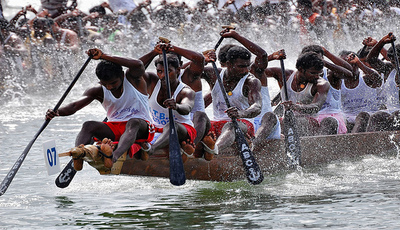 Held in memory of the 'Prathista' ceremony of Haripad Subramanya Temple and therefore has a religious significance. Payipad Boat Race is celebrated for three days, commencing from the 'Onam' festival day. Snake boat processions are taken out on the first two days. The competitive boat-race takes place on the third day.

Other Boat Races are