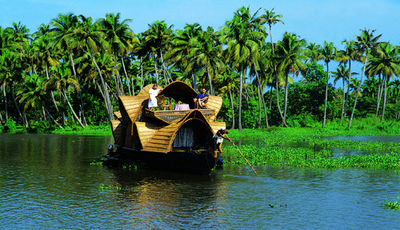 With the Arabian Sea on the west and a vast network of lakes, lagoons and fresh water rivers crisscrossing it, Alappuzha is a district of immense and natural beauty. Referred to as the Venice of the east by travellers from across the world, this backwater country is also home to diverse animal and bird life. By virtue of its proximity to the sea, the town has always enjoyed a unique place in the maritime history of Kerala. Today Alleppey has grown in importance as a backwater tourist centre, attracting several thousands of tourists each year. Alappuzha is also famous for its boat races, houseboat holidays, beaches, marine products, and coir industry. A singular characteristic of this land is a region called Kuttanad. A land of lush paddy fields, Kuttanad is also called the Rice Bowl of Kerala and is one of the few places in the world where farming is done below sea level. 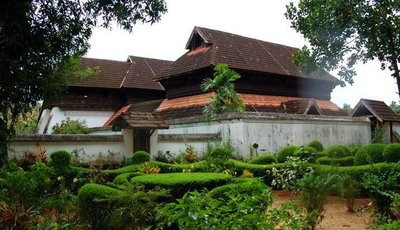 The 18th century Krishnapuram Palace built during the reign of the Travancore monarch, Marthanda Varma, is a double storied structure which displays typical characteristics of Kerala architecture-gabled roofs, dormar windows, narrow corridors. It houses one of the largest mural paintings in Kerala called the Gajendra Moksham. It measures14 feet by 11 feet and is at the western end of the ground floor, a walking distance from the Palace Pool. Inside is also a museum of antique sculptures, paintings and bronzes. Situated 47 kms from Alappuzha on the way to Kollam, Krishnapuram is easily accessible by bus from either town. 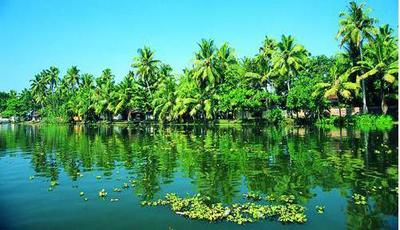 The Sri Krishna Temple at Ambalapuzha, 14 kms from Alleppey is among Kerala's more famous ones boasting of the typical temple architectural style of the state. It is equally famed for its palpayasam - sweet milk porridge offered to the deity. The temple's main festival occurs in March/April. It was in this temple that the 16th century poet Kunjan Nambiar staged his first Ottam Thullal, a solo dance performance with high social content. It is also in this temple that Palipana is performed by Velans (sorceres) once every twelve years. Paintings of the Dasavatharam (the ten incarnations of Lord Vishnu) are on display on the inner walls of the Chuttambalam. 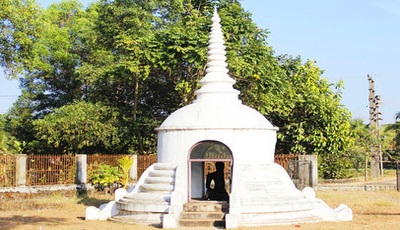 Close to Ambalappuzha, the village of Karumadi is famous for its Karumadi Kuttan, a black granite figure of Lord Buddha, in a sitting position. This name means 'A boy from Karumadi'. It is said to belong to the 9 th or 10 th century. This idol of Buddha, that is around 3 feet tall and whose left hand is missing, attracts many tourists as well as archaeologists every year. This place was even visited by His Holiness Dalai Lama in the year 1965. In total, the village of Karumadi is a serene and scenic place to visit. A trip to Alappuzha is incomplete without a visit to this beautiful village. 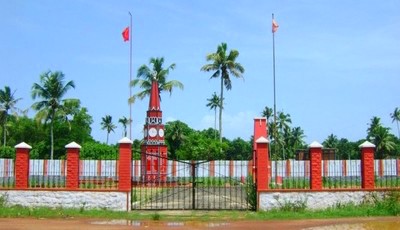 A short distance from Alleppey is the village of Punnapra which is a coastal area of the Arabian Sea. This village has gone down in history as the scene of a bitter and heroic fighting between the Communists and Travancore State Police in the Punnapra Vayalar Communist uprising of 1946.These are the memorial of the martyrs located in Alappuzha near Kalarcode. Every year, on this date, a procession is held from the Valya Chudukad to the Memorial, to commemorate this uprising. This place is also known as the rice bowl of Kerala. 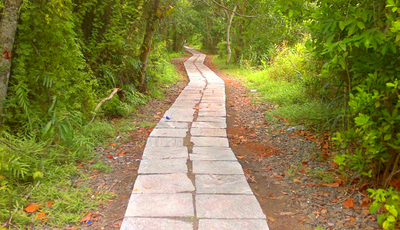 This is a small beautiful island in the Vembanad Lake and is accessible only by boat from Kumarakom and Muhamma. Pathiramanal means 'Sands of Night'. This island along with the sights of the lake on both sides makes it a mesmerising sight. This island was also known as Anantha Padmanabhan Thoppu. The now uninhabited island was, in the late seventies of the 20 th century, home to around 14 worker families who were later on rehabilitated to the mainland. This small island is now home to around 91 local species and 50 species of migratory birds like pintail ducks, large egrets, Indian pond heron, stork-billed kingfisher, gulls etc. 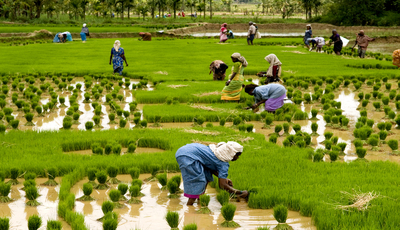 Kuttanad, is called the rice bowl of Kerala because of its wealth of paddy crops. It lies at the very heart of the backwaters. The scenic countryside of Kuttanad with its shimmering waterways also has a rich crop of banana, cassava and yam.

This perhaps the only region in the worked where farming is done 1.5 to 2 ms. below sea level. Inland waterways which flow above land level are an amazing feature of this region. 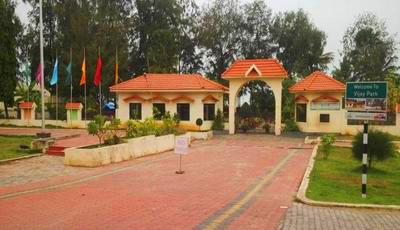 This park is located at the southern side of the Alappuzha Beach. This place is an apt picnic spot with children's park & boating facilities. The park is filled with lush green trees and offers its visitors a nice and serene environment. For the little ones the park has a toy train that gives them a joy ride around the park. Various cultural events also happen here. (Open 15.00-20.00 hrs). Entrance fee Rs. 2 per person; Free entrance for children below 5 years. Boating charge: Rs.10 for 10 minutes. Other facilities for children: Toy train, bicycles. Video permit Rs. 25, Camera permit: Rs. 5 respectively Ph: 242960 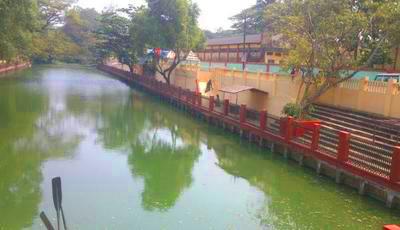 The park near the Alappuzha Beach, the Sea View Park is a very beautiful garden offering the much need break to the visitors. The Sea View Park gives you a break from the temple tour in Alappuzha. This park is an apt place for family outings. This park is surrounded with lush green trees and birds as well. As per the locals, this park is a bird watcher's paradise. It offers boating facilities and a swimming pool. Boat rentals for 10 minutes: Round boat (4 seater): Rs. 10. Pedalboat (2 seater): Rs. 15. Pedalboat (4 seater): Rs. 25. Video permits Rs. 15, Camera permit Rs. 100 respectively. 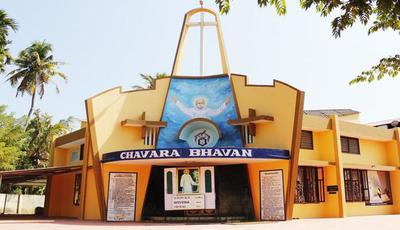 Chavara Bhavan (6 kms. from Alleppey, accessible only by boat) is the ancestral home of the blessed Kuriakose Elias Chavara.

It is now a holy shrine and spiritual resort where thousands of devotees gather for prayer, receive favours and feel amply gratified. Here, a 250 year old historically important beacon of light is preserved intact in its original and primitive form. 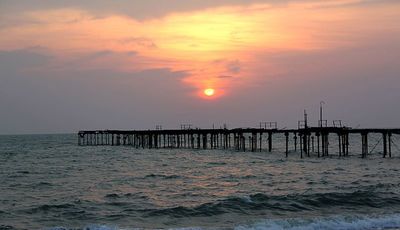 At a distance of 35 kilometres is the Alappuzha Beach, one of Kerala's famous tourist destinations. It is just a kilometre away from the Alappuzha Railway Station. This is one of the most popular picnic spots in Alappuzha. The pier, which extends into the sea here, is over 150 years old. Entertainment facilities at the Vijaya beach park add to the attractions of the beach. The adventurous activities offered here include water sports like swimming, parasailing, high speed boats, water scooters and many more. There is also an old lighthouse which is greatly fascination to visitors. 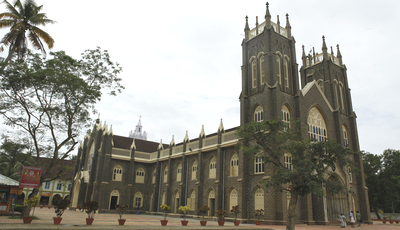 Lying 22 kilometres North of Alleppey, is the coastal town of Arthunkal. The famous, St. Andrew's Basilica, is an important Christian pilgrim centre. The church is named after St. Andrew the Apostle. It is considered as a holy land by the devotees. The Annual festival of Arthunkal Perunnal, the feast of the patron saint is held in the month of January. During this festival, a procession with the statue of St. Sebastian is taken to the beach from the church and back again. On the last day of these festivities, the devotees crawl on their knees to the church from the nearby beach.

Situated 24 kms. away from Alappuzha, on the Alappuzha - Thiruvalla Road. Established in 1810, the church is dedicated to St. George. It is believed that prayers and offerings at this church help to heal all mental disorders and other ailments.

During the annual feast (5th, 6th, 7th of May) pilgrims from all parts of South India, irrespective of caste and creed, visit the church and seek the blessings of the saint. 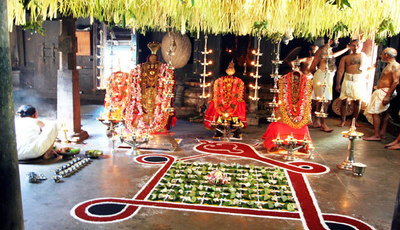 32 kms. south of Alappuzha situated near Harippad, this is a serpent shrine under the patronage of a 'Brahman' family, headed by a priestess. The ancient shrine is an internationally renowned pilgrim centre dedicated to the Serpent God Nagaraja. Sarpa Yakshi and Naga Yakshi are the beloved consorts of Nagaraja. It is believed that Nagaraja as the installed deity is endowed with the form of Hari (Lord Vishnu) and the spirit of Lord Shiva. Legend has it that the first priestess of Mannarasala gave birth to a five-headed snake, which is believed to reside in the ancestral house to safeguard the family. At Mannarasala barren women are believed to be blessed with children and a special turmeric paste available at the shrine is credited with powers to cure even leprosy. 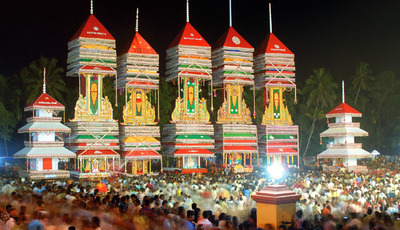 One of the main Hindu temples in Kerala, the Chettikulangara temple is located in the Mavelikkara taluk of Alappuzha. The main deity here is Sree Bhadrakali. The temple is believed to be more than 1200 years old. The annual festival called the Chettikulangara Bharani, held during February – March, is one of the famous festivals here. As a part of this festival Kettukazhcha, is held drawing large crowds of devotees. Processions of all decorated structures on chariots, brightly decorated effigies of horses and bullocks and cultural performances make a spectacular pageant.